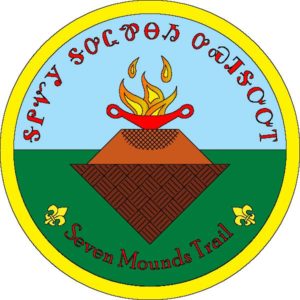 The trail is for those who want to learn more about the Native American peoples who inhabited the area that makes up the Camp Buck Toms and East Tennessee.

As part of the Historic Trail award, we are to study information relating to the historic nature of the trail. East Tennessee has been home to several Native American peoples over the millennium. There are seven Late Woodland Hamilton focus mortuary mounds located on the property. There is also the remains of a village site that dates to the Mississippian period 1000 – 1550 CE. Several pits and fireplaces were found. There is also the remains of a house. There are two Native American Tribes that inhabited the area in most recent eras. The first Native American tribe are the Yuchi people who historically lived in the eastern Tennessee River valley in Tennessee in the 16th century and into East Tennessee. The second Native American Tribe are the Cherokee. The seven mounds and remains of a home were excavated and catalogued in a survey by Charles H. Nash in 1941. This activity was sponsored by the Tennessee Valley Authority and Works Project Administration. The unpublished site survey records are on file at the University of Tennessee McClung Museum in Knoxville, Tennessee. The Seven Mound Trail connects the seven Indian Burial mounds that are located on the Camp Buck Toms property. The Mississippian culture was a mound-building Native American civilization archeologists date from approximately 800 CE to 1600 CE, varying regionally. It was composed of a series of urban settlements and satellite villages (suburbs) linked together by a loose trading network, the largest city being Cahokia, believed to be a major religious center. The civilization flourished from the southern shores of the Great Lakes at Western New York and Western Pennsylvania in what is now the Eastern Midwest, extending south-southwest into the lower Mississippi Valley and wrapping easterly around the southern foot of the Appalachians barrier range into what is now the Southeastern United States. The Mississippian way of life began to develop in the Mississippi River Valley (for which it is named). Cultures in the tributary Tennessee River Valley may have also begun to develop Mississippian characteristics at this point. Almost all dated Mississippian sites predate 1539–1540 (when Hernando de Soto explored the area), with notable exceptions being Natchez communities that maintained Mississippian cultural practices into the 18th century.

Several cultural traits are recognized as being characteristic of the Mississippians. Although not all Mississippian peoples practiced all the following activities, they were distinct from their ancestors in adoption of some or all these traits. The construction of large, truncated earthwork pyramid mounds, or platform mounds. Such mounds were usually square, rectangular, or occasionally circular. Structures (domestic houses, temples, burial buildings, or other) were usually constructed atop such mounds. Maize-based agriculture. In most places, the development of Mississippian culture coincided with adoption of comparatively large-scale, intensive maize agriculture, which supported larger populations and craft specialization. Shell tempered pottery. The adoption and use of riverine (or more rarely marine) shells as tempering agents in ceramics. Widespread trade networks extending as far west as the Rockies, north to the Great Lakes, south to the Gulf of Mexico, and east to the Atlantic Ocean. The development of the chiefdom or complex chiefdom level of social complexity. The development of institutionalized social inequality. A centralization of control of combined political and religious power in the hands of few or one. The beginnings of a settlement hierarchy, in which one major center (with mounds) has clear influence or control over several lesser communities, which may or may not possess a smaller number of mounds. The adoption of the paraphernalia of the Southeastern Ceremonial Complex (SECC), also called the Southern Cult. This is the belief system of the Mississippians as we know it. SECC items are found in Mississippian-culture sites from Wisconsin (see Aztalan State Park) to the Gulf Coast, and from Florida to Arkansas and Oklahoma. The SECC was frequently tied into ritual game-playing, as with chunkey. The Mississippians had no writing system or stone architecture. They worked naturally occurring metal deposits, such as hammering and annealing copper for ritual objects like Mississippian copper plates and other decorations but did not smelt iron or practice bronze metallurgy.

Questions can be directed to janemanlyscoutmuseum@gmail.com